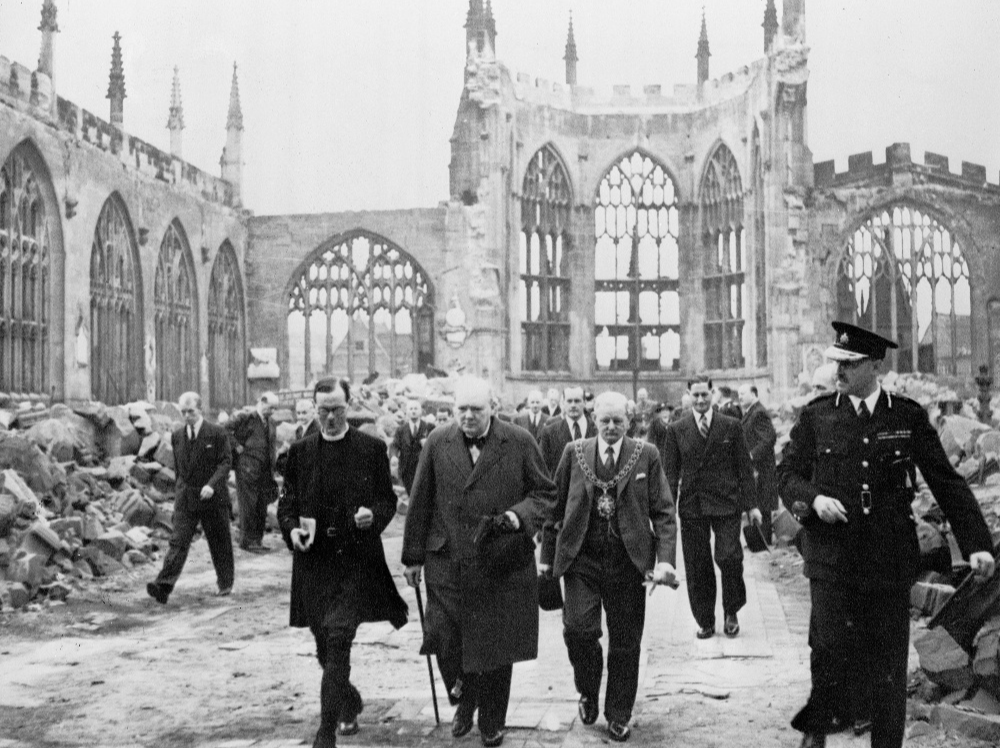 A brief history of Coventry Cathedral

The banner photograph at the top of this blog post is the work of DAVID ILIFF license: CC BY-SA 3.0. The image can be found here:

Coventry Cathedral has been around for over 800 years. For the majority of this time, the church was known as St Michaels, and at one point its parish was the largest in England. St. Michael's was made a Cathedral in 1918. In 1931 the permanent pews were replaced with chairs, a recognition even then of the increasing need for more cathedral seating and flexibility within.

During WWII Coventry was attacked numerous times, but on the 14th of November 1940, Luftwaffe bombs all but obliterated the 14th Century Coventry Cathedral. Although other cathedrals, including Exeter and St Paul's, were damaged by aerial bombardment, Coventry was the only one to be destroyed.

The very next day, while the ashes were still smouldering a decision was made to rebuild the Cathedral. A commitment that became a beacon of reconciliation, changing liturgy, and remembrance.

The ruins of the 14th Century Cathedral remain, highlighting the contrast of the historic ruins with the new mid-century modern architecture of the post-war era.

The mid-century approach to Cathedral architecture

While serving as a Captain on the beaches of Normandy, architect Basil Spence, in response to his friend's enquiry as to his ambitions, replied 'to build a cathedral'. In 1950, out of 600 applications, his unique and unorthodox design was chosen to become the new Coventry Cathedral.

Basil Spence, had been an assistant to Edwin Lutyens and well understood the importance of integrating the decorative arts into architecture. The rebuilding project offered one of the most significant opportunities in the twentieth century to commission artists, craftsmen and women in many disciplines. Commissions included what is probably the largest tapestry in the world, by Graham Sutherland.

The Cathedral's opening was seen as a symbol of a national, post-war revival. 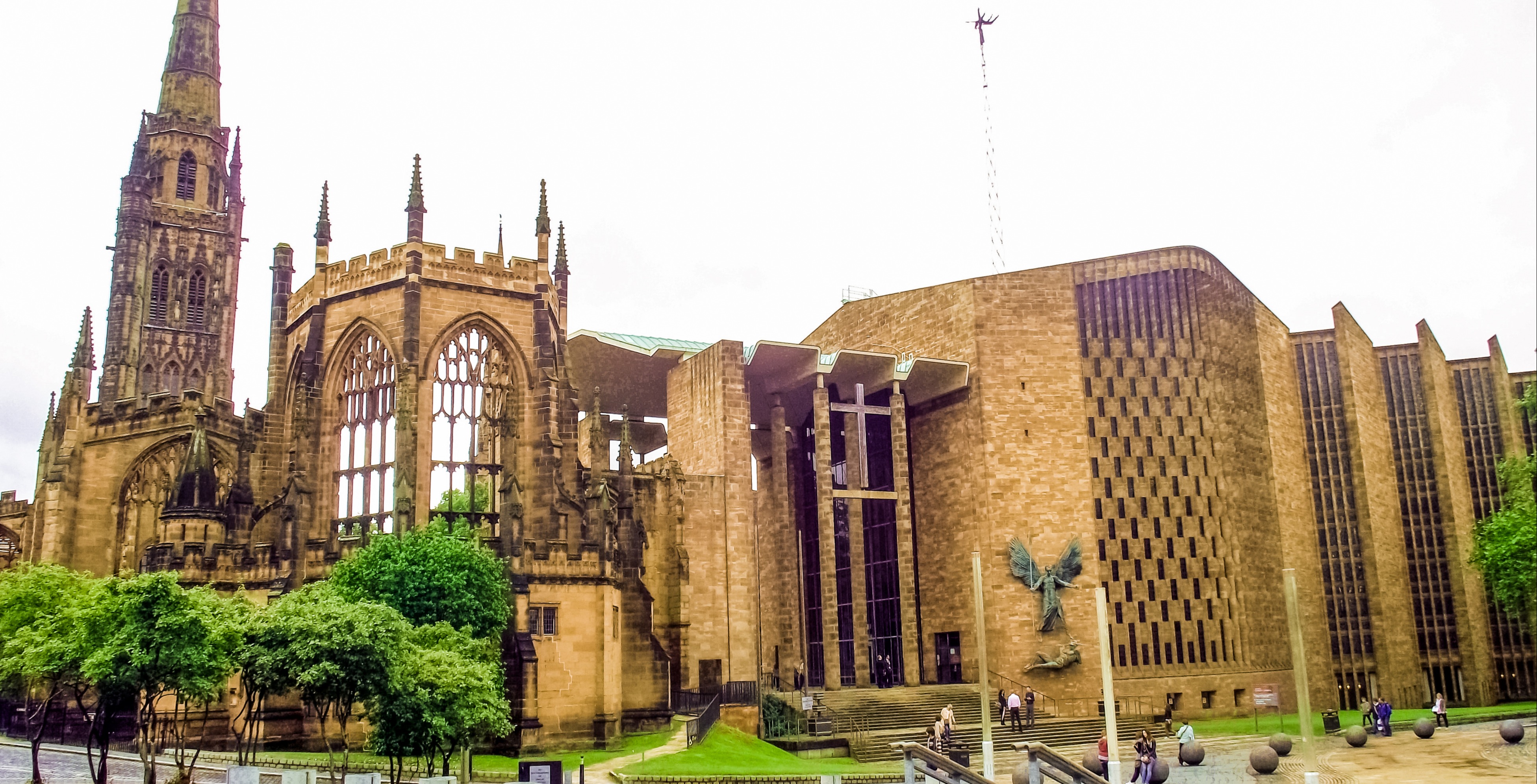 Dick Russell RDI was recruited by Spence to work on the seating, and he came up with a classic design, the Coventry chair; two thousand of which, to this day, blend seamlessly with the architecture of the Cathedral.

The Coventry chair was also used in some of the world's finest places of worship from Hereford to Kalamazoo and beyond. 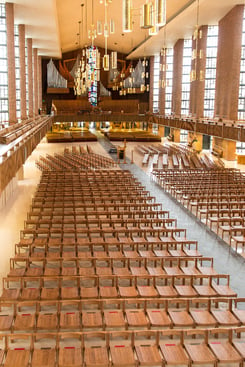 The modern classic of church seating 50 years on

The original Coventry Chairs are still in use at Coventry Cathedral, and at over 50 years old, they show no signs of needing anything more than proactive care. That's the beauty of good design and fantastic engineering.

Valparaiso University, a Lutheran university not far from Chicago, has an annual exchange programme with Coventry Cathedral through connections with the Community of the Cross of Nails. The university has a chapel, designed by Charles Stade and dedicated in 1959, which bears more than a passing resemblance to Spence's original conception for Coventry Cathedral.

A few years ago, Valparaiso recognised the significant design and community connection that the Coventry Chairs could bring to their Chapel. They contacted the Gordon Russell Trust who passed them on to the team here at Luke Hughes.

Thus began the process of reviving Dick Russell's design for a new generation. 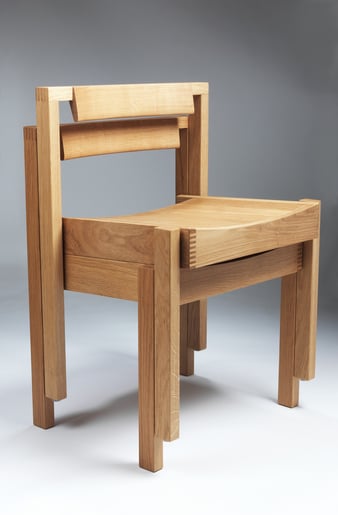 Reviving the classic design for a modern congregation

The first step in reviving the Coventry chair was to examine the original drawings and archive material at the Gordon Russell Museum. We then re-engineered the drawings and design to account for manufacturing processes and modern production techniques that were not available fifty years ago.

For Valparaiso, we adapted the dimensions of the Coventry chair for a new audience. We also upgraded one of the versions of the linking mechanisms in solid brass and made it integral to the structure.

Looked at from a distance, not much of the chair appears to have changed, but up close, one can see the minor details that update this post-war design into one appropriate for the 21st century.

As a furniture design consultancy, our central design philosophy is that furniture should enhance architectural space, not embarrass it. We have been designing cathedral seating and church seating across the UK and USA for the last thirty years.

The significance of the furniture blending with the architecture of the space in which it sits means that we can provide cathedral seating and churches with pews and chairs that suit their needs and design aesthetics.

We can ensure that the church furniture you order looks as if it has always been there. Speak with the team at Luke Hughes today to find out how we can help you make the right reordering choices for your way of worshipping.

The Longevity of Arts and Crafts Movement Furniture | Blog