The Master Carvers' on Chippendale 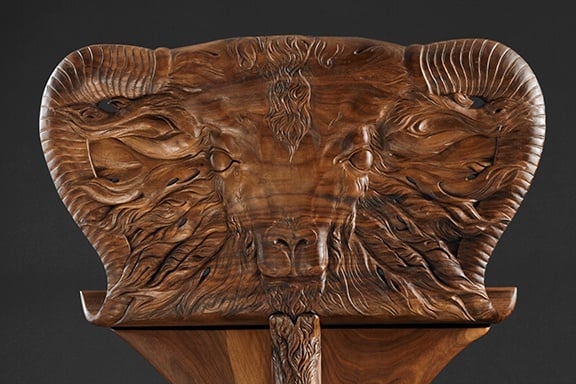 On 7 June 2018, we opened the exhibition 'Matching Patron and Maker' in collaboration with the Master Carvers' Association. We sit down with member Hugh Wedderburn to discuss the legacy of Thomas Chippendale and what the future holds for traditional carving.

Hugh Wedderburn will introduce himself as a humble woodchopper. He carves mainly in wood, though also enjoys stone and marble, working in period styles and designs of his own contrivance. He restores, reproduces or designs and makes pastiche pieces for curators, collectors decorators or dealers, but his greatest pieces are in collaboration with the commissioning client.

How has the work of Thomas Chippendale inspired you on this new project?

Hugh Wedderbrun (HW) - Thomas Chippendale is, with Grinling Gibbons, a name the public associate with our work and someone we all respect for his design innovation and the sheer quantity of work he is responsible for whilst maintaining the highest quality.

'Chippendale style' is ubiquitous across the globe, and the distinguishing mark of original work is always quality.

Wanting to celebrate the Master is natural but not by trying to copy or make a pastiche. Rather we show how we have learnt our trade and studied period styles to carve in the tradition, turning these acquired skills to designing new pieces, collaborating with our Patrons, as Chippendale did with his, to produce pieces they can take pride in, and share with family and friends.

Chippendale absorbed the styles of his time and developed them through the decades, developing with the times and leaving a rich heritage.

How did you decide on the theme of music?

HW - Luke Hughes, himself a Master furniture designer and maker working in Covent Garden, suggested the Music Stand Project as a focal point for our celebrations, to create functional furniture that is sculptural, and a pleasure to live with when not in use. This resonated, not least because music demonstrates how acquired knowledge is developed and carried forward; history informs for the future.

Jonathan Louth is an friend and architect I have known and worked with for decades. The way in which ArchiCantuor (a group that brings professional and trained amateur musicians together with audiences who appreciate music & architecture) have integrated into the celebrations with Paul Munden also joining has been joyful.

The whole project has developed a life of its own, the initial thoughts between myself, Paul Ferguson, Huon Mallalieu and Sir Nicholas Goodison, introduced to Luke Hughes by Rosemary Ransome-Wallis. Much of this is due to the appeal of the Music Stands. I get quite emotional when I dwell on the generosity of all involved.

Thomas Chippendale opened his famous workshop in St Martin’s Lane, Covent Garden in the mid-1750s. Do you believe his identity still lives on today?

HW - Chippendale’s identity is ubiquitous, I’ve said that already but it really is. Even in his day his Directory was widely used and widely interpreted. Irish Chippendale is recognised as a style of its own by todays market. In the future the Indian, Indonesian or Chinese Chippendale of today might also find its place in the taste of connoisseurs.

He was innovative (the best designers are), always adapting to the newest techniques and pushing for new styles. Where we differ is in holding onto the old techniques. I suppose you could say we rock the baby while the bathwater is freshened. We absorb new techniques more gradually and I hope to maintain some of the old qualities which might otherwise get lost in the rush for modernity.

How do you think the legacy of Thomas Chippendale will continue in the future, in relation to modern design?

HW - Following on, as CNC and digital printing become more common we draw attention to the differing nature of the end product. At risk of sounding mad, the spirt or soul is lost. The algorithm which breaths life into the inanimate is not yet written - analogue still has its place.